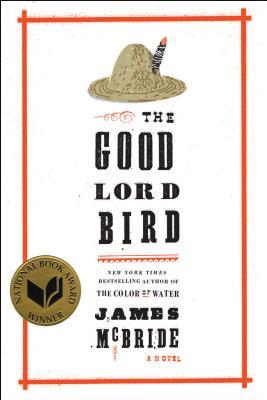 Have in the Library? Yes!

This book by James McBride recounts the story of abolitionist John Brown’s famous raid on Harper’s Ferry from the point of view of Henry “Onion” Shackleford, a (fictional) young slave swept up by John Brown as he goes through Kansas. Their relationship begins with a mistake: due to a mis-hearing, John Brown believes that Onion is a girl and also his good luck charm. Before he knows it, Onion is part of his band and, through an clever re-write of history, an integral part of the famous day at Harper’s Ferry. The best part about this book is the prose– it’s insanely good. Right from it’s rollicking first chapter, you’re taken up in the wild pace of the abolitionists’ cross country ride. Part of the fun is that it’s a completely irreverent take on the character of John Brown. Far from being a hero, in McBride’s tale, the “Old Man” is a frustrating, yet endearing, mix of clueless, religious and ridiculous. His favorite pastime is offering up long prayers:

Bullets zinged high overhead and kicked around his boots and near my face, but he stood where he was a good five minutes…He didn’t notice, course, for he was preaching. His sermon about the Holy Word and King Solomon and the two mothers with one baby was clearly important to him. He went on warbling about his sermon as one of Broadnax’s Negroes flared a light and set fire to the cannon’s fuse. The Old Man didn’t pay it a lick of mind. He was still bellowing on about King Solomon and the two mothers when Owen piped up, “Pa! We got to go.”

With such hilarious writing, the violence of John Brown as he screeches across the territories burning and killing almost escapes you. So, too, does the power of his conviction, as when he stands over the body of one of his men.

He sighed…pulled a feather off the Good Lord Bird, and rose. He turned and stared at the town grimly, burning in the afternoon sun. He could see it plain, the smoke spiraling up, the Free Staters fleeing, the rebels firing at them, whooping and hollering. “God sees it,” he said.

Without knowing much about the actual person of John Brown, I’m not sure where McBride takes liberties (aside from the obvious), but he certainly captures the feeling of the time well. As in the best historical novels, Onion’s exploits read as fresh as though they were happening right now.

As I read this, I was thinking about allyship. What does it mean for non-black and especially white people in times like these, with rampant police killings and other racial injustices? On the one hand, one of the most prominent points of the book is how John Brown set about to “free the negro” without actually consulting or listening to the black people he came across. It becomes a kind of comedy of errors that ends up costing him dearly. John Brown was also a truly devoted champion for black rights at a time when being so was perilous. As he said to his sons, “I have only a short time to live, and I will die fighting for this cause. There will be no peace in this land until slavery is done…Stay here if you want. If you’re lucky, you’ll find a cause worth dying for.”

The moral of this story then, is not to be like John Brown. And none of the characters, even the tenacious Onion, are truly heroes. For all it’s tall-tale trappings, I thought it was pretty realistic in it’s portrayal of the flawed ways in which everyday people interact with the historical moments handed to them. Perhaps, like the ivory billed woodpecker, the “Good Lord Bird” that pecks on rotten trees to fell them, we’re all just working on something too big for us ever to accomplish in our lifetimes. McBride leaves us the hope that even if we don’t see the change, just as John Brown did not survive to see the Emancipation Proclamation,  it will “someday fall and feed the others.”